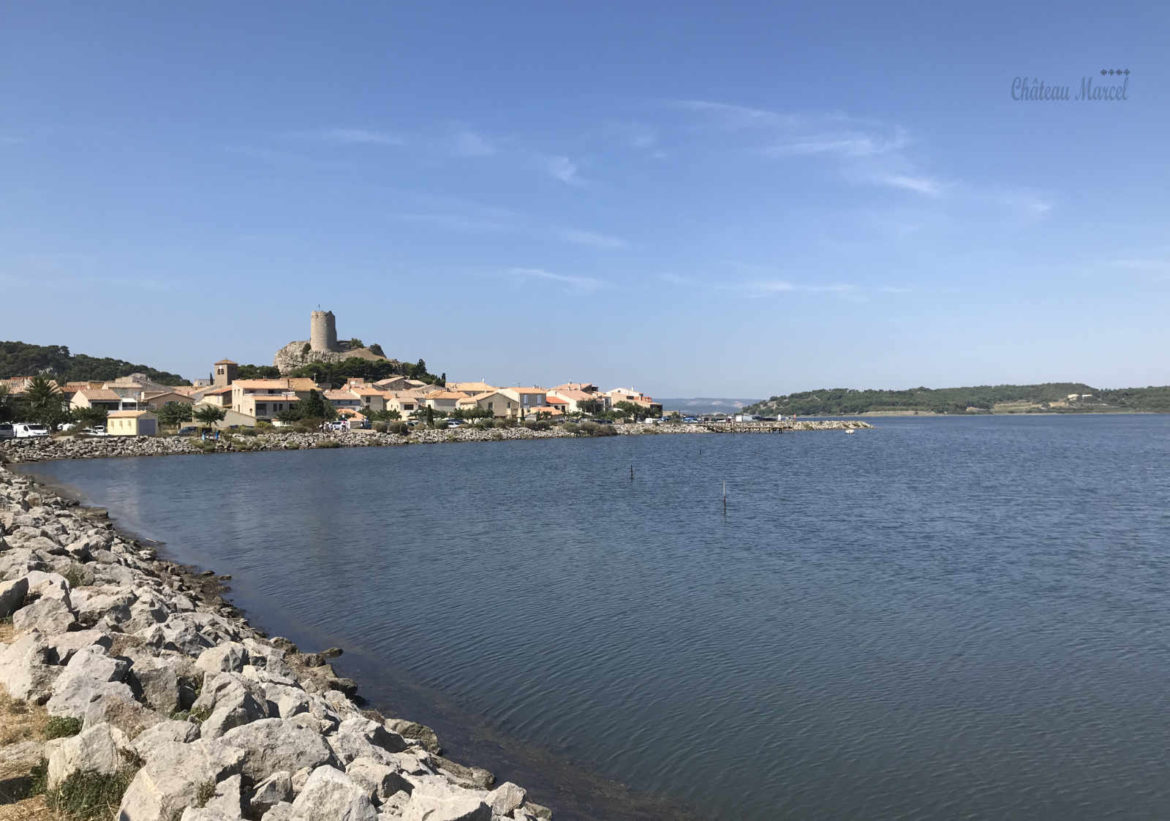 Gruissan Plage, close to Narbonne is a beautiful wide open strip of flat sand. But Gruissan has more…

Between the ponds of Gruissan, Grazel and the Mediterranean, the seaside resort of Gruissan is the most original station of the department of Aude. The old village is dominated by its castle, the ruins of the tower Barberousse and its small fishermen’s houses that unfold around. South of the village, one enters the seaside districts of Gruissan with the Port right bank and the port left bank Mateille. Further south, it is Gruissan-plage with its famous quarter of the chalets on piles.

On the side of the beaches of Gruissan, the choice is wide! In the center of the seaside resort, there is the artificial beach of Grazel facing Bird Island. To the south, it is on the beach Chalets that we will find all the originality of Gruissan with houses piled in the background. To the east, towards Narbonne, there is the wild beach of Mateille and the beach of Ayguades where there are many structures for holidaymakers (holiday residence and campsites). Going towards Port-la-Nouvelle, we have the beach of Vieille Nouvelle.

Gruissan is also known for its wind. Several sites are available to practice kitesurfing (for example on the Grazel pond) or windsurfing. To the west, the salt flats on the island of St. Martin can be visited through a discovery tour (approximately 1h30). Note that the various parking lots of Gruissan are free, very rare in a seaside resort. On the other hand, the access to the various beaches of Gruissan is prohibited to dogs throughout the year (including unsupervised beaches – municipal decree of June 22, 2009). 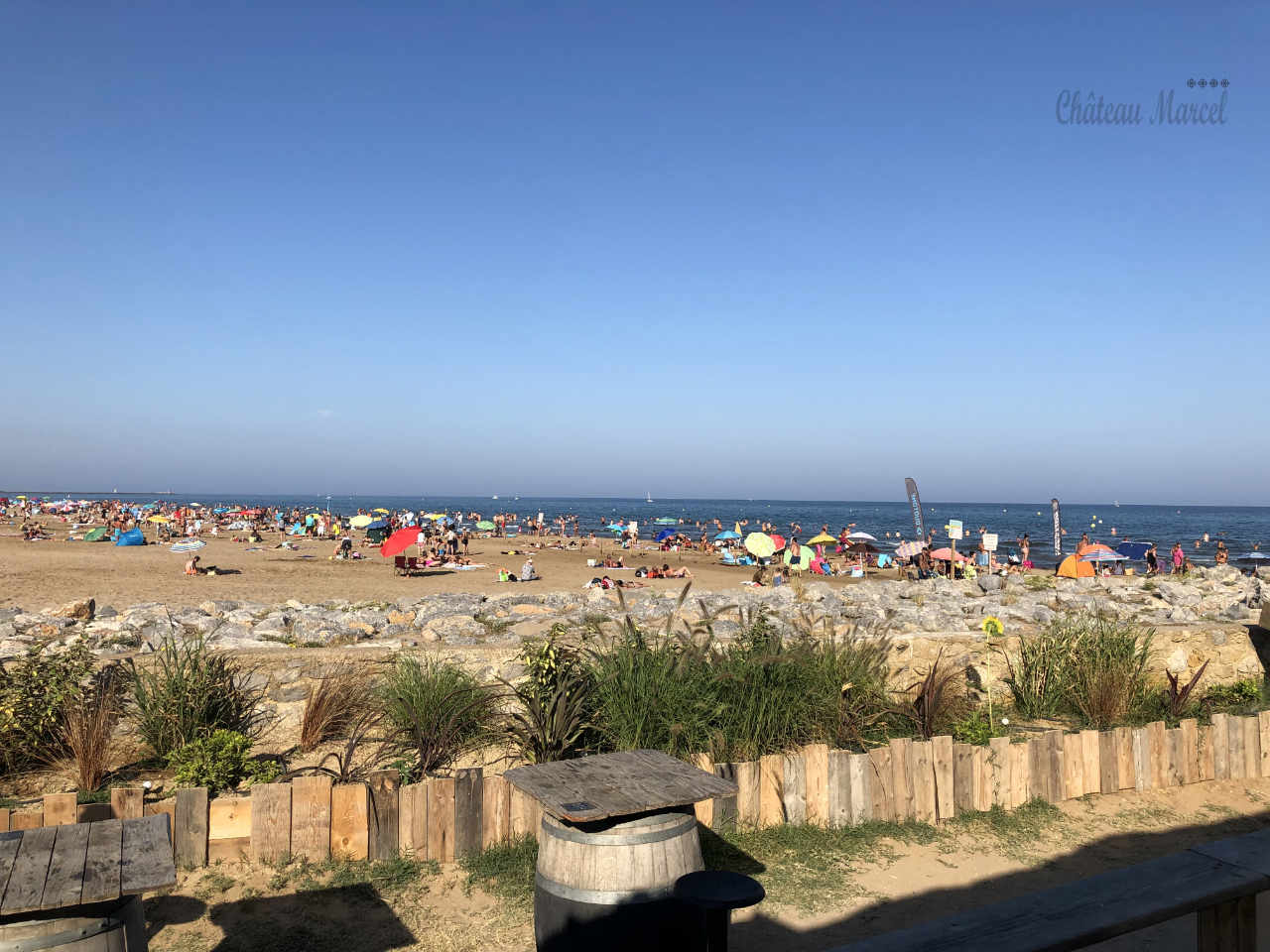 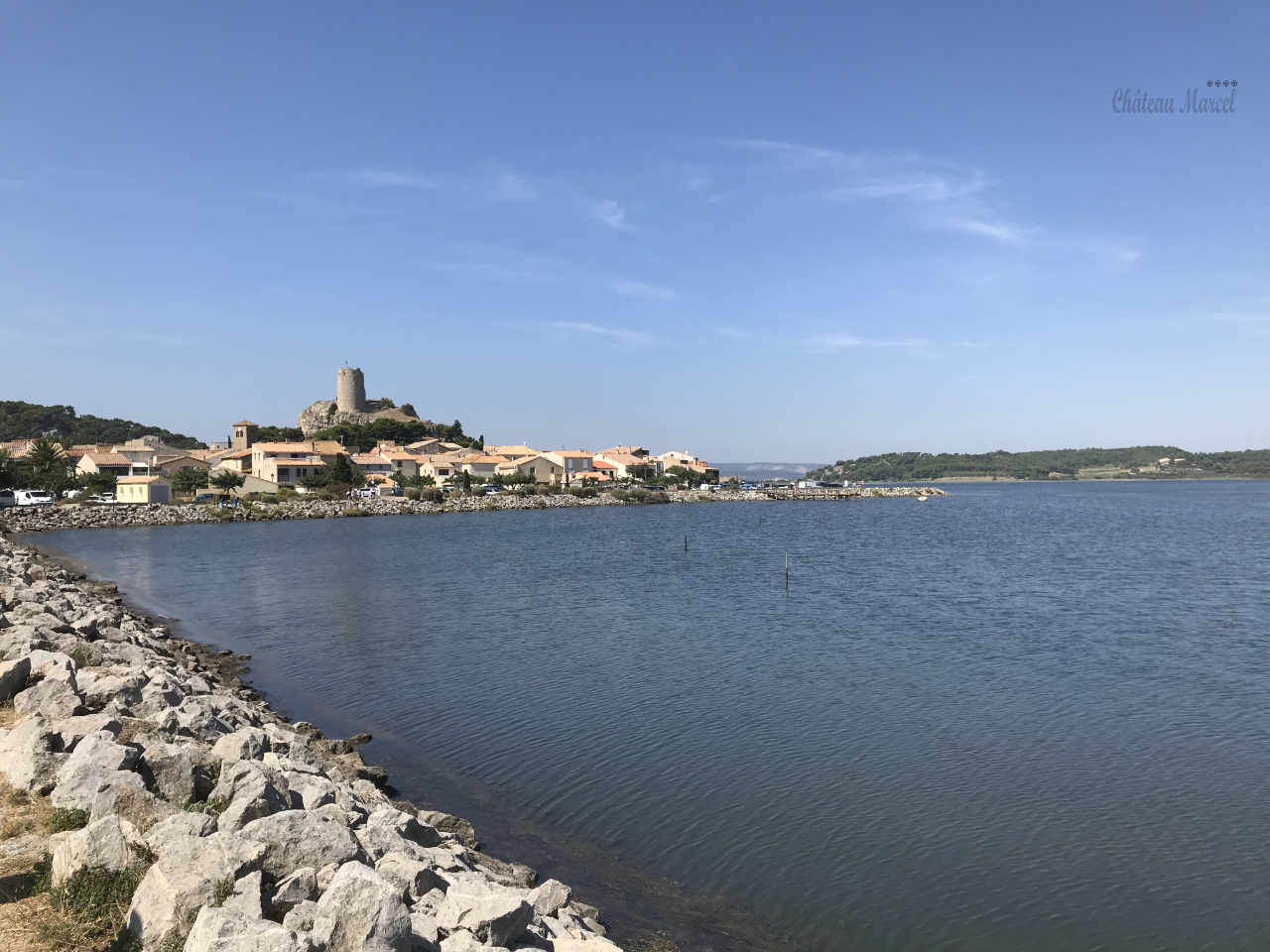 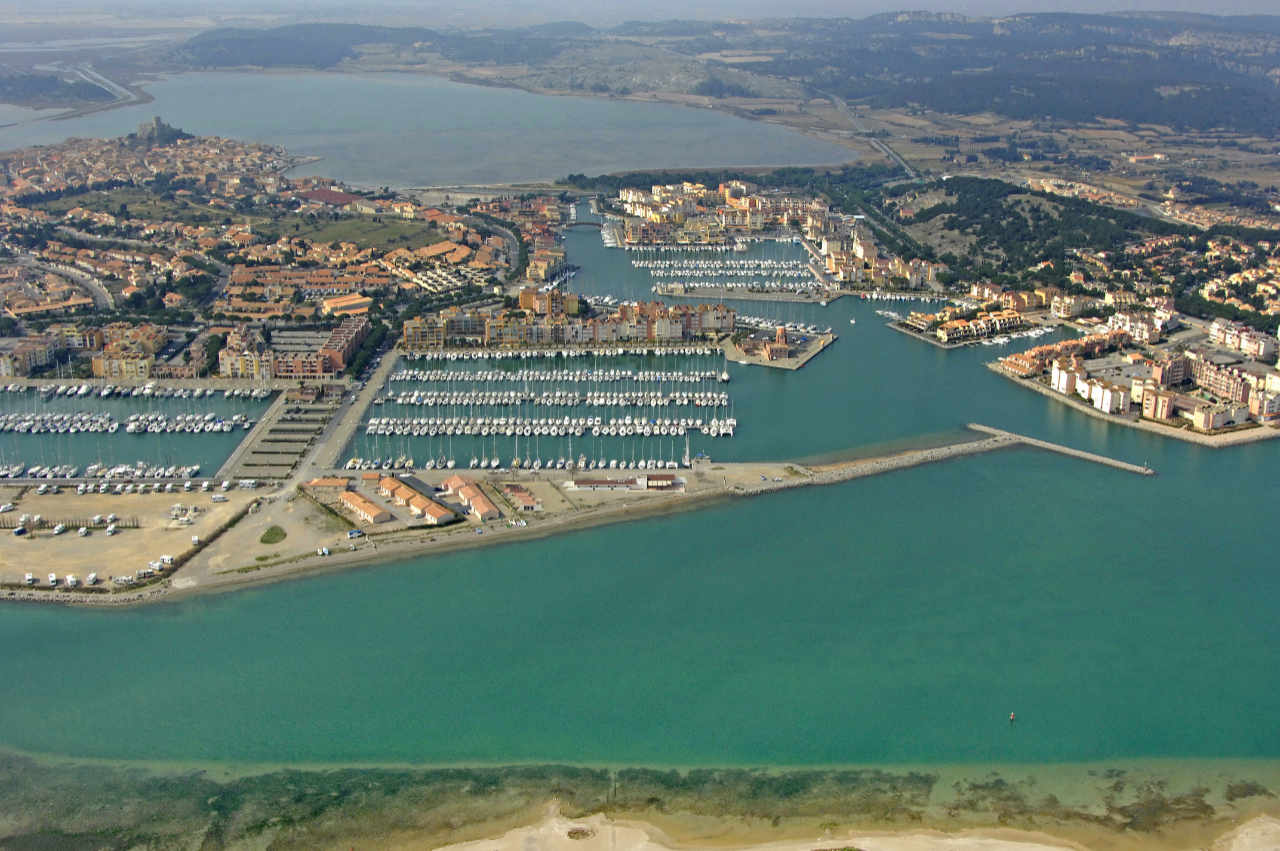 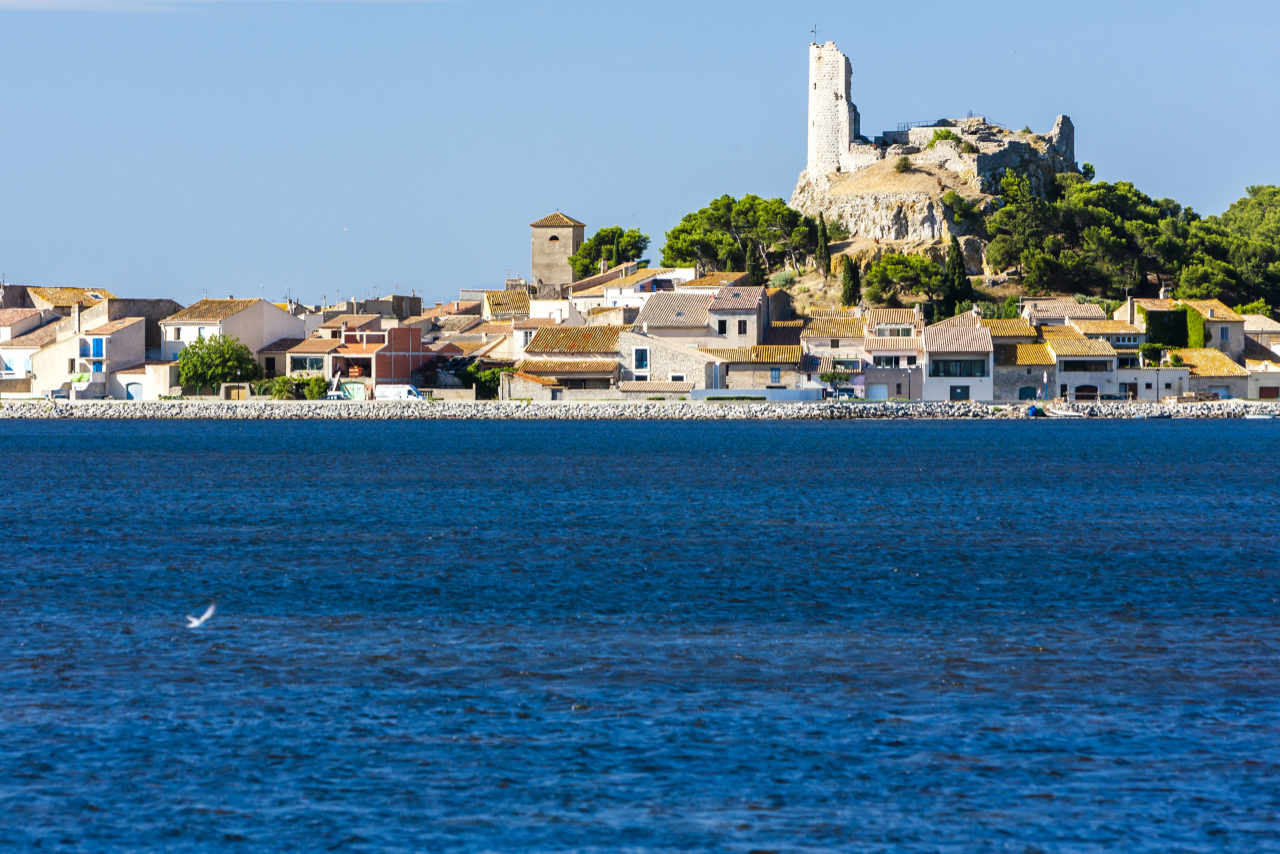 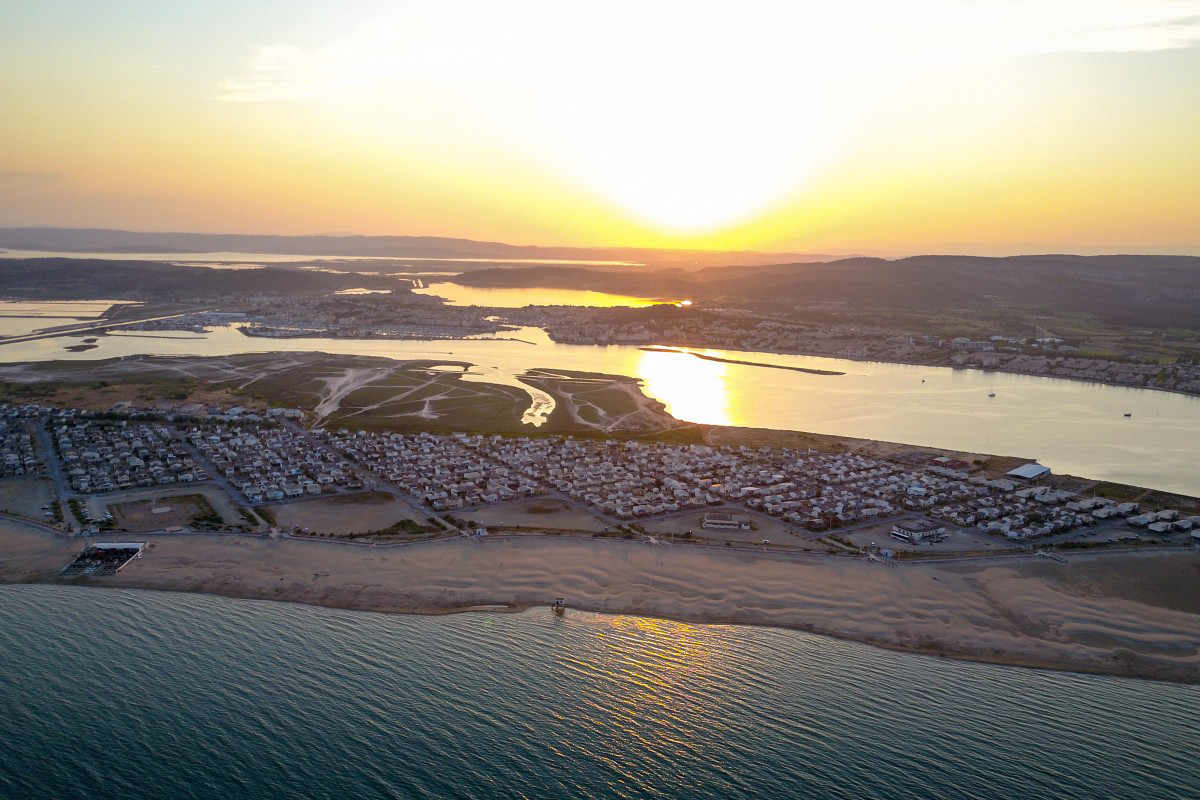 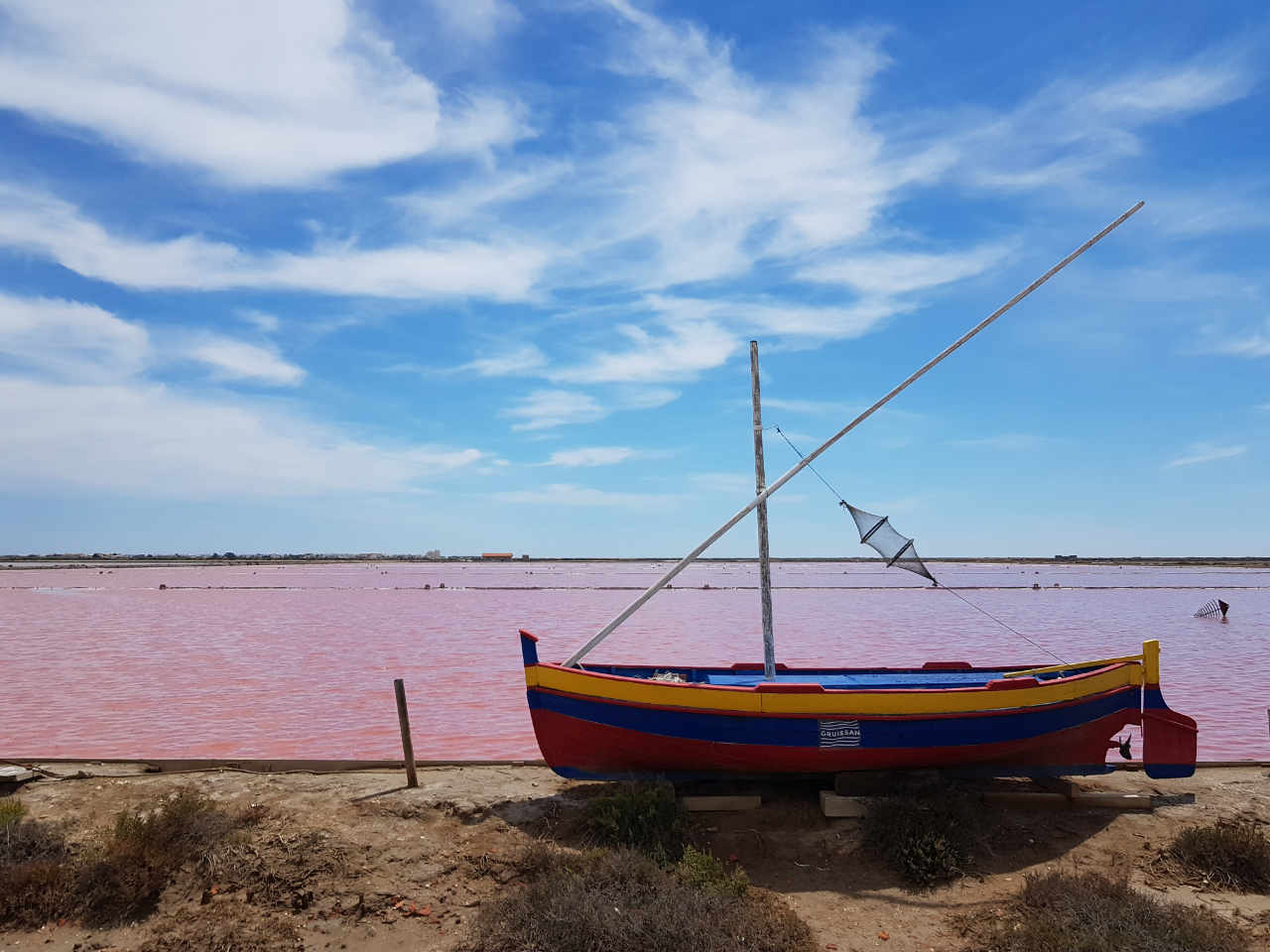 Gruissan’s Chalets Beach is located between the harbour entrance and the entrance of the Grazel channel. This is, in our opinion, the Aude’s most original beach with its many houses on stilts. Almost 2 km of fine sand and 150 meters wide with two lifeguard stations (zones n° 2 and 8 – they are mounted on stilts to keep in style with the neighbourhood), this is the perfect beach!

You will also find on this Gruissan Beach a water sports centre (near the Grazel channel) with an access for people with reduced mobility (another is at zone n°2) and an activity area at the zone 5. the beach is equipped with toilets (in white cabins).

The area is divided into 10 zones. For each, there is ample free parking with access to the beach. You can also use the bike path that connects the village to the beach along the canal.

Note that there is also a private beach at the zone 5 with a restaurant and beach equipment for hire.

This beach is also a landmark for windsurfing (with a competition taking place every May – the Défi Wind).

Gruissan’s Grazel Beach is the only beach resort in the city centre. This artificial sandy beach is located in the outer harbour opposite the Ile aux Oiseaux. This beach has the advantage of being almost completely enclosed and is therefore similar to a lake. Although the resort of Gruissan is often windy, this beach is always available for swimming (green flag). There is a lifeguard station near the Place du Cadran Solaire and access for people with reduced mobility.

Several free car parks are available near the beach.

Gruissan’s Ayguades Beach is located to the east of the resort towards Narbonne-Plage at the hamlet of Ayguades. This long sandy beach stretches for over 1.5 km and is surrounded by numerous campsites and holiday homes. Above this residential area, there is the lake of Ayguades, which is used for water activities.

Two lifeguard stations are available on this beach, one is at the car park and the other in the centre of the beach. Access for the people with reduced mobility is located near the first street towards the beach on the Avenue of the Jonque. There is also a private beach on the northern part of the beach.

As for the parking, this beach is poor! Rare in Gruissan! Only a few spaces are available at the entrance to the area. Better to use a bike if you want to go on this beach or park at the north end of the beach (limit with Narbonne).

Gruissan’s Mateille Beach is bordered to the west by the harbour entrance, on the east by Ayguades Beach and to the north by the Mateille Lake with its water sports centre where you can practice board sailing. This is one of the most untamed beaches of Gruissan and it extends for over 1.2 km. There is only one lifeguard station on the beach, on the west side.

Note that there is an area in the north where naturism is tolerated.

To get to this beach from the port of Gruissan, take Avenue des Plages (you have to go to Mateille stadium), then pass over the bridge of Mateille Lake. The car park is at the end of the road at the beginning of the beach.

Gruissan’s Vieille Nouvelle Beach (or Salins/Salines beach) is the most untamed beach of this small resort. Little known and uncrowded. It is especially popular with kite surfers (they say it is the windiest spot of the Mediterranean – so swimming is not recommended). The environment is virgin of any construction and is surrounded by pleasant dunes. Naturism is tolerated.

Access to this beach is quite difficult due to an unmaintained road (but that’s probably the reason why it is uncrowded …). To go to it, head towards Salins St Martin by the D232. After the bridge, follow the direction for the Clos de l’Estret by the street of Vieille Nouvelle. After 200 meters, you come to a track (very narrow entrance). The beach is about 2 km away, there is an unmaintained car park at the beach.

The Tour Barberousse (in English, Redbeard Tower), is all that remains of a castle built at the end of the 10th century to observe the approaches to the harbour at Narbonne and to guard against seaborne invasions of the city. Built on a steep, rocky hill, the castle was enlarged in the 12th century by the Archbishops of Narbonne, Guillaume de Broa.

The castle of Gruissan played an important role in protecting the local population against pirate attacks, which regularly took place in the eleventh century and the twelfth century AD. The castle was situated on a high limestone hill, from where one could also defend the nearby port of Narbonne. Due to its strategic location, the castle was coveted by many. For example, the castle of Gruissan became the scene of bloody battles during the crusade against the Albigensians in the thirteenth century AD, and the castle was even almost completely destroyed during the Wars of Religion. The town itself did not come out of the fight unscathed. Many houses were completely swept away by the fierce fighting. It was therefore decided to use the now abandoned castle as a quarry to rebuild the lower village. In this way this town could become the most important seaside resort in the Aude department.

On Salin Ile Saint Martin, located near the old village, salt culture and oyster farming coexist for the pleasure of your taste buds. Coming, you will discover the perfect balances between nature and culture on a unique site in Europe. Guided tour of the saline (duration: 1H20), pedestrian course (about 2 km) on the salt with comments on the various phases of production, video film on the current production of salt, botanical information, bird watching.